Hello My Natural Hair LOVELIES!! I’ve been hella busy, with school, work, and MOVING!! I think I am the only person who gets excited about moving into new spaces because that means to me A NEW BLANK CANVAS to work my magic on. Below is a pic of my living room, missing mirrors and artwork, but once that has been placed I will upload another photo. I LOVE interior decorating and design. I am a HGTV FREAK! This is an apartment, I can not wait until I get a condo or home. It will be the BOMB DOT COM!!! Wanted to share with you guys so far, what do you think?!

Every Thursday I will post a “Feel Good” type of song, from my fave artists! Today we have Zo hailing from DETROIT, MI who’s in the group ‘Foreign Exchange” as well! This here is “Count To Five” from Zo’s album “Man Made” the video has nothing to do with the song, it’s just some nice imagery! Simply loves the KIDS! enjoy my coily, curly lovelies!

I decided to wear a twist out this weekend versus my usual protective style of a half wig! I periodically wear my natural hair w/o the ends tucked, but as we all know in the natural hair community, this is not a safe practice, if you’re trying to retain length! I rocked my hair like this all of 2 days. I did the twist on wet hair, after my cowash routine, then I flat twisted my hair on the sides, and free style twist throughout. I find that using small perm rods work best for me in reducing the shrinkage for this type of style. Today is Monday, I will no flexi-rod my hair and wear that for 2 days.. Then I will co wash again, and braid my hair into 7 plaits in preparation for my half wig. I really don’t like to mess in my hair, because I am on a goal for MAXIMUM length retention. It has been exactly 1 year and 1 month since I BC’ed. I am looking forward to where my hair will be year 2! Until next time my loves! Love and LEARN your hair, and it shall FLOURISH!!! Be loved! Be pride! Be YOU! MUAHHH!

Hello my lovelies! This is a method I’ve been using for years in regards to my 4B/4C hair! I will go out on the limb and say this is partly why my hair is able to retain length. ENJOY! EDUCATE yourself! And HAPPY GROWING!

Hello all! As you may or may not know, I have big chopped my hair a total of 4 times in my lifetime as a natural, 7 years and counting! March of 2013 my hair was SEVERELY damaged due to me putting a “texturizer” in my head in attempts to making my curl looser. Boy oh boy! Silly of me, needless to say it all fell out w/in 3 months.. I BC’ed all but 2 inches of my hair, the least amount needed to grip for braids. The next 10 months I adorned my head with nothing but protective styles from senegalese twist to half wigs. I may have straighten my hair with a blow dryer twice on a low setting HEAVY heat protector, that’s IT for these past 10 months.. This past Saturday I decided to get my hair PROFESSIONALLY straighten, a ceramic flat iron silk (controlled heat) before I went to her I took down my protective style I had in for 2 weeks, I co-washed, detangled, and deep conditioned my hair.. I let it sit over night, slept in a plastic cap, and had my stylist wash it out about 14hrs later in efforts to prevent ANY TYPE OF HEAT DAMAGE! (Lawd I’m TERRIFIED of this) anywho here is the final result… I will also post the products I used..

*praying to the natural hair gods, that my hair reverts back completely once I tire of this straight hair.* 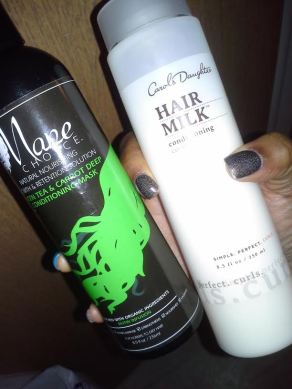 These 2 products helped TREMENDOUSLY in prepping my hair for the heat. The flat iron was only passed through no more than twice! Thank GAWD!! The Mane Choice left my hair extremely soft after being in for 14 hours! LOL! I’m a fan of Carol’s Daughter’s just a bit pricey, but worth it.

Once this straight style has reverted back I will go another 10 months without heat, and only protective styling. I wanted to do a length check. I have retained 8 inches of growth in 10 months of very low manipulating of my hair! Leave it alone, and I promise you it will grow!!!

First of all, to those following me and those who will in the future (I hope!) HAPPY NEW YEAR!!!!!!!!!! My NYE was pretty eventful! Memories made that will last a LIFETIME! Let’s try to stick to our resolutions, aye? More like our 1 week commitment! LOL! Only 6% of Americans actually keep them.. Now, back to the subject at hand!

SHRINKAGE!  Exhibit A then B 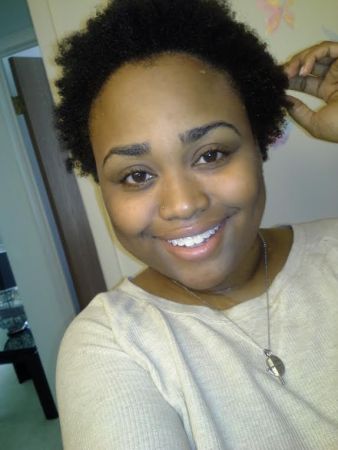 What is shrinkage, and why does it only seem to occur in women of color? (The Structure of Our Hair)

Different ethnic groups have observable differences in the structure, density, and growth rate of hair. With regards to structure, all human hair has the same basic chemical composition in terms of keratin protein content.[6] Franbourg et al. have found that Black hair may differ in the distribution of lipids throughout the hair shaft.[6] Classical Afro-texture hair has been found to be not as densely concentrated as other phenotypes.[1] Specifically, the average density of Afro-textured hair was found to be approximately 190 hairs per square centimeter. This was significantly lower than that of Caucasian hair, which, on average, has approximately 227 hairs per square centimeter.[1]

Loussourarn found that Afro-textured hair grows at an average rate of approximately 256 micrometers per day, while Caucasian hair grows at approximately 396 micrometers per day.[1][7] In addition, due to a phenomenon called ‘shrinkage’, Afro-textured hair that is a given length when stretched straight can appear much shorter when allowed to naturally coil.[8] Shrinkage is most evident when Afro-hair is (or has recently been) wet.

So pretty much our hair shrinks up because it is in our genetics. Some women will have 3A-3C hair while others are 4A-C.. None the less embrace it, whatever your texture! Scientifically proven, all that other ish.. LOL! Shoutout to Wikipedia!

I decided to blow dry my hair on a medium setting.. I won’t be doing that again. I’m absolutely terrified of heat damage.. And to think I use to WANT my hair to be “trained” translation of that bullshit is HEAT DAMAGE! But hey, you live and you learn, right?? GOOD! I write this blog to say this.. Learn to embrace the shrinkage, because it is your friend, and is a sign of healthy hair. It’s a bit of a struggle to combat, but with patient and care you’ll find what works for you!